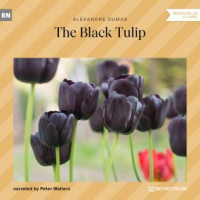 The Black Tulip is a historical novel written by Alexandre Dumas, père. The story begins with a historical event - the 1672 lynching of the Dutch Grand Pensionary (roughly equivalent to a modern Prime Minister) Johan de Witt and his brother Cornelis, by a wild mob of their own countrymen - considered by many as one of the most painful episodes in Dutch history, described by Dumas with a dramatic intensity.